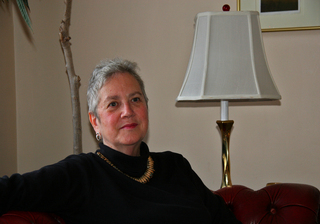 SUZANNE WADLEY JAWORSKI RHODENBAUGH is a poet, essayist & critic born in Tampa, 1944, to Georgia natives Marguerite Douglas Wadley & William Morrill Wadley, III.  She lives in St. Louis and is the author of

The Girl Who Quit at Leviticus (Homestead Lighthouse Press, 2022)

"The poems offer a rich and varied world...The music, the wry humor, & the precise

imagery combine to create the voice of a woman who has lived deeply..."

"...as if Elizabeth Bishop suddenly turned up in a Southern gothic..." -- Molly Peacock

The Shine on Loss (Winner of the Painted Bride Quarterly Chapbook Series, 1998);

The Spirit That Moves Us Press & others.

Since 1976 married to Tom Rhodenbaugh, an administrator of poverty, labor and human rights

other online sources, and from DUNAWAY BOOKS, ST. LOUIS: booksdunaway@gmail.com.